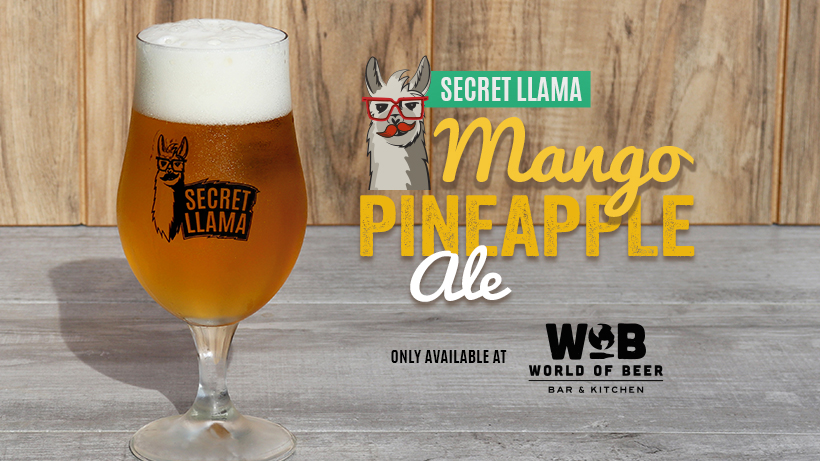 Secret Llama, World of Beer’s proprietary line of beers, has partnered with domestic and international breweries to bring you one-of-a-kind beers. Currently, you can find Secret Llama Blueberry Wheat Ale & Secret Llama IPA in select markets, and, coming to a WOB near you, we are bringing back one our most favorite Secret Llama releases, Mango-Pineapple Ale. 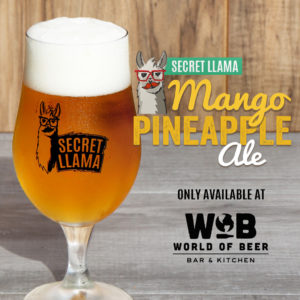 For this release, we were fortunate to partner with Brouwerij de Brabandere. Their fresh perspective on recipe formulation and innovation has led them to becoming one of the most prolific brewers in Belgium with styles ranging from fruit-ales to nitro quadruples. Housing one of the most sophisticated foeder-aging sour programs in the world, we are fortunate to work with their team of brewers to develop this unique beer.

Beer of the Week: Secret Llama Mango Pineapple Ale. Clocks in at 5.0% ABV and is an exotic lightly sour fruity beer that combines a subtle Belgian tartness with sweet notes of mango and pineapple.

Want to try this beer? Ask a local WOB*Star if this beer is on tap near you!

Secret Llama, World of Beer’s proprietary line of beers, has partnered with domestic and international breweries to bring you one-of-a-kind...